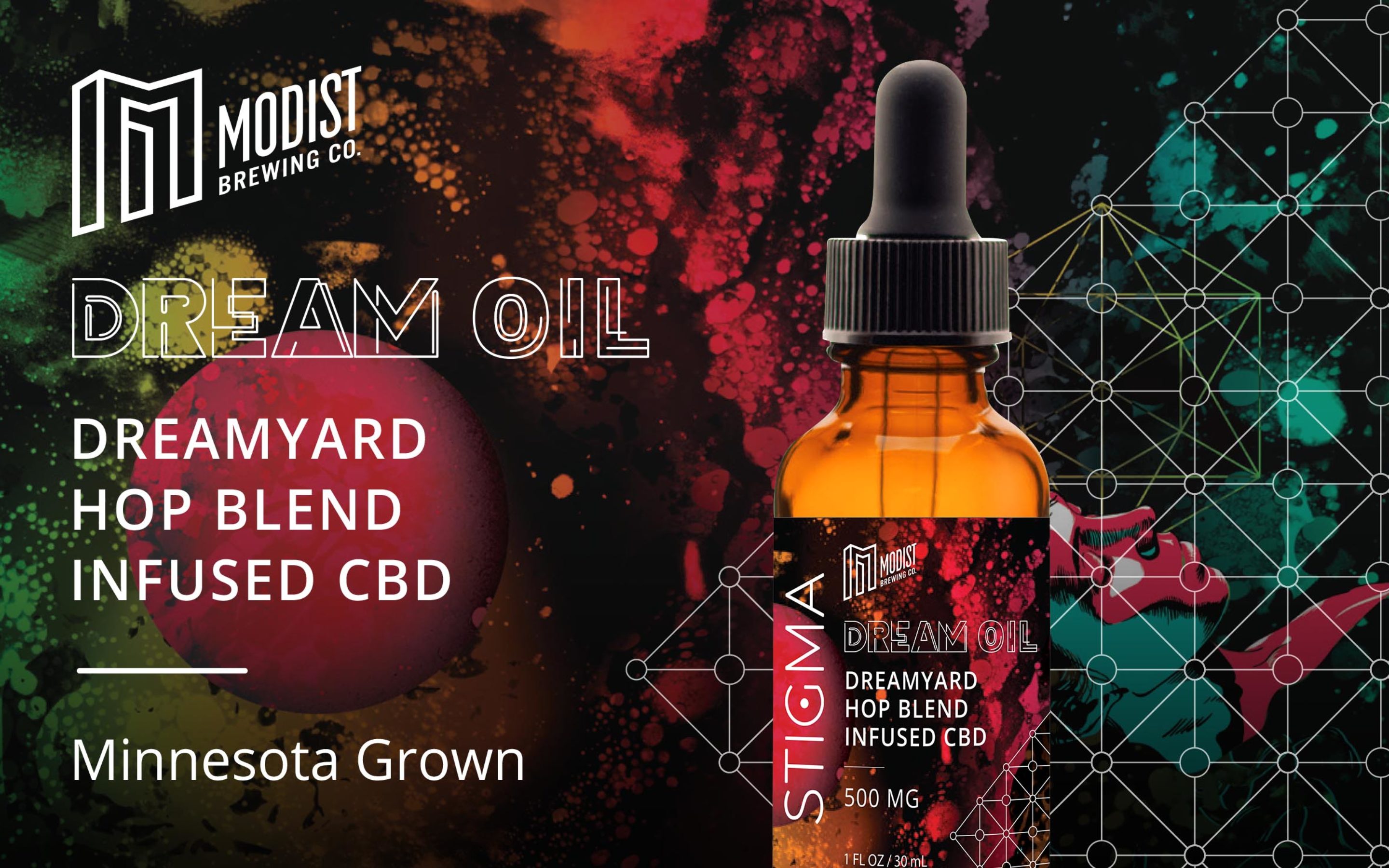 An event on Thursday, September 26 will showcase the all-Minnesota CBD collaboration between the companies

Minneapolis, MN (FINAL DATE, 2019) – Stigma, a CBD producer and retailer in Minneapolis’ North Loop, today announced its partnership with local craft brewery Modist Brewing to create an all-Minnesota CBD collaboration. The product, Dream Oil, is a CBD tincture that features a hop infusion from Modist’s Dreamyard IPA. Dream Oil will debut at an event at Modist on September 26.

“The CBD product that we’ve created with Modist is truly the first of its kind,” said Josh Maslowski, founder of Stigma. “Collaborating with one of Minnesota’s most innovative microbreweries made this project a lot of fun and we can’t wait to share it with people who are turning to CBD for relief.”

“We met Josh during Stigma’s grand opening and it was clear from the outset that their approach to the budding cannabis industry reflected our innovative approach to craft beer,” said Erik Johnsen, Brewery Development Director at Modist Brewing. “We’re excited to collaborate with one of our North Loop neighbors and showcase the flavor profile from our most popular beer in a completely new form.”

The Stigma/Modist Dream Oil is a hop-infused, non-alcoholic tincture that is proudly Minnesotan from top to bottom. “It was important to us that we showcase an entire supply chain of Minnesota companies,” said Maslowski. “From the growing to the production to the testing, it’s all happening in Minnesota.” Other companies involved in the making of Dream Oil include Budding Acres, Hemp Acres, and BZ Sciences.

Stigma opened in 2018 with a range of products including gummies, topicals, and tinctures. Cannabidiol, more frequently referred to by its shorthand CBD, is one of the many chemical compounds that can be extracted from the cannabis plant and does not contain psychoactive elements.

Modist Brewing opened in 2016 in Minneapolis. It was recently awarded Most Innovative Brewery at the 2019 MN Brewer’s Cup and prides itself on experimentation and creativity.

Dream Oil makes its debut as a 500mg 1oz. tincture September 26 and will be available for sale at both the Modist taproom and Stigma showroom in October. A 6oz. “CBD Growler” is slated for holiday purchase.

For more information about Stigma and the event on September 26, please visit https://stigmahemp.com. It will take place at the Modist taproom, 505 N 3rd Street Minneapolis, MN 55401, from 7-10 p.m. and feature remarks by Mayor Jacob Frey. 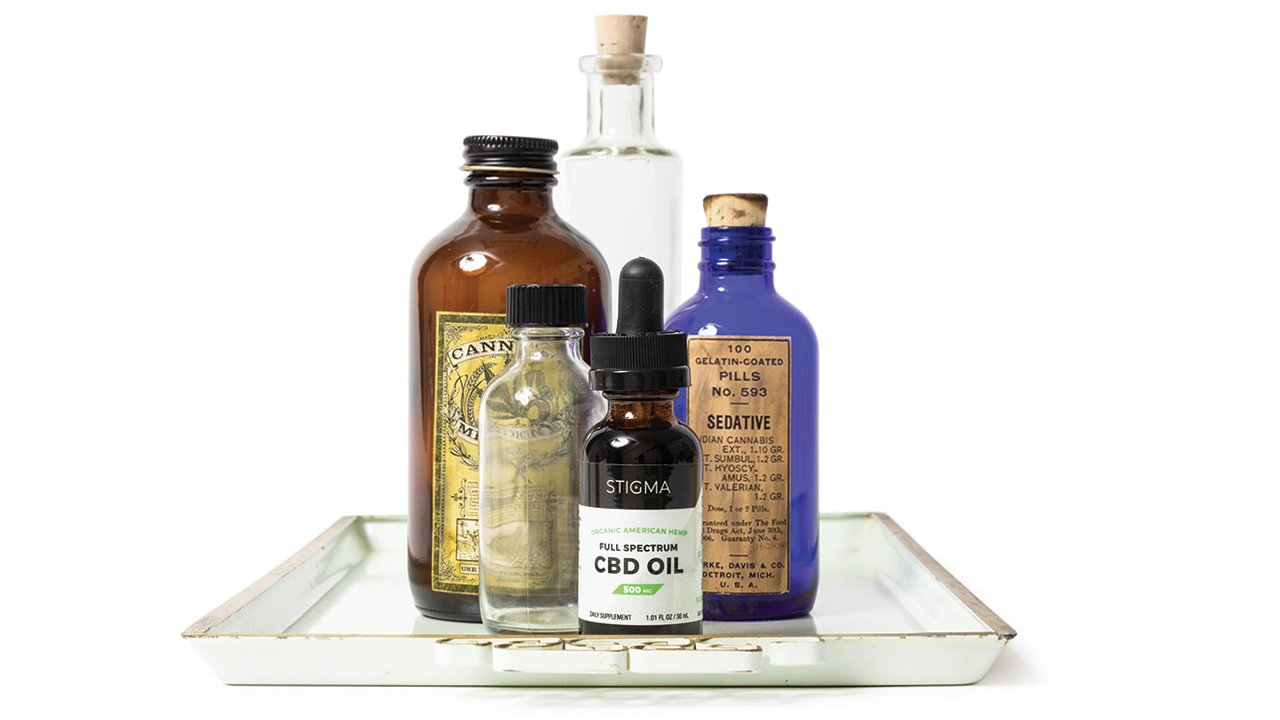 Mpls St. Paul Magazine recently featured Stigma in a well-done piece entitled “Is Everyone Taking CBD?” Spoiler alert: not everyone is taking CBD but in our opinion perhaps they should be! Give the article a read and let us know what you think.

Consumers are embracing the cannabis extracts, despite a lack of research.

Up the street from the Minnesota Twins home opener, a different kind of debut took place: The first storefront dedicated to hemp and CBD products in downtown Minneapolis opened.

During the opening celebration of Stigma, a new shop at 250 3rd Av. N. in the North Loop, Minneapolis Mayor Jacob Frey expressed his support for the rapidly growing industry and renewed his push to legalize cannabis statewide.

“This is going well, this is a business that’s sticking around for the long haul and yes, indeed, we are continuing on the track toward full legalization, as well,” Frey said.

Frey has supported statewide legalization and decriminalization of cannabis throughout his time in City Hall. As a council member, he co-authored an ordinance lowering the penalties for small-scale possession of the drug from a misdemeanor to a petty misdemeanor.

Earlier this month, Republicans in the Minnesota Senate swiftly voted downa measure to legalize the recreational use of cannabis. Citing public support, Frey said he hoped full legalization will happen within the next few years.

“As we legalize, we need to make sure that the benefits are seen broadly,” he said. “This can be an important industry that contributes greatly to our economy in a way that is inclusive.”

Unlike cannabis, hemp and CBD can’t get anyone high. But consumers are turning to the products for a number of health concerns, despite a lack of research into their effectiveness.

St. Louis Park resident Josh Maslowski founded Stigma in 2018 after a friend and his mother-in-law were diagnosed with cancer. While looking for natural treatments online, he came upon hemp and CBD.

“We got passionate about the idea of being able to help people in a world right now where stresses are up and disease is up and all that,” he said. “We’re looking at this as a supplement or another alternative option for people to just try to make themselves feel better.”

Maslowski acknowledged the CBD industry is not properly regulated nationwide, leading some sellers to market products with inaccurate contents. He said having a storefront allows customers to ask questions about the products and build trust with the company.

“We’re here to be transparent,” he said.

His wife, Sarah Maslowski, was skeptical of CBD at first. Now, she consumes CBD extract to relax before flying and in the mornings before her workouts.

She has since gotten several of her friends interested in the products. Her mother, Susan Graner, who was diagnosed with brain cancer, also consumes CBD as a pain reliever along with medical cannabis.

“I hope people will take a moment to learn more about it,” she said. “I like the idea, for a consumer, that it might take away a pill and it will bring health to them.”

Along with Frey, Hennepin County Sheriff Dave Hutchinson was also present at the opening.

Frey called the opening of Stigma “a big step forward for Minneapolis” in normalizing the use of cannabis products.

“You can’t ignore the real life impacts that CBD has on people, and I’m proud to say that we aren’t,” he said.

Miguel Otárola is a reporter covering Minneapolis City Hall for the Star Tribune. He previously covered Minneapolis’ western suburbs and breaking news. He also writes about immigration and music on occasion.motarola@startribune.com 612-673-4753 @motarola123

Applications to grow hemp in the state of Minnesota have increased steeply since the start of 2019, according to the Minnesota Department of Agriculture.

Congress passed the 2018 farm bill in December, which legalized industrial hemp as a crop plant that can help produce commodities like fiber, grain or oil.

Hemp is described as a cousin of marijuana, with much lower levels of THC — the chemical that produces a high.

CBD oil is extracted from hemp and is sometimes marketed to help with problems like chronic pain and anxiety.

CBD oils and CBD massages are some of the products available at Stigma Hemp, which opened Thursday in the hip and vibrant North Loop neighborhood in Minneapolis.

Store owner Josh Maslowski acknowledges people are buying CBD products from a number of sources, but his shop offers an alternative.

“The timing of it had certainly something to do with the farm bill,” Maslowski said. “But the idea of a retail store was always something I wanted to do because I believe that in this space people have a lot of questions and they want to be able to look somebody in the eye versus just buying it online where you don’t trust exactly who’s making it.”

Minneapolis Mayor Jacob Frey attended the store opening with the goal of encouraging the conversation around legalizing recreational marijuana use in the state.

The Minnesota Hemp Association reports there are at least five companies operating stores that only sell hemp and CBD products in the Twin Cities. Some spas and grocery stores also carry CBD products.

This week, Walgreens announced it will sell CBD creams, patches and sprays in nearly 1,500 stores across the country.

Whitney Place, assistant commissioner for the Minnesota Department of Agriculture, said farmers are responding to the new markets made possible by legal hemp.

“It’s no longer considered a controlled substance. Therefore, our farmers can qualify for federal programs like specialty crop grants or even crop insurance,” she said.